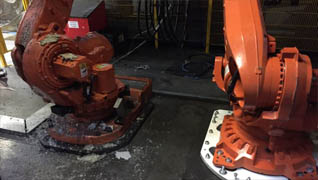 When cleaning surfaces with dry ice, the combination of kinetic energy of dry ice pellets driven by a strong flow of air and the effect of a thermal shock is used. Dry ice is a solid form of carbon dioxide (CO2).

Pellets are propelled with the air stream at high speed. As a result of the high speed and the weight of the pellets, a high impact strength is created and this acts similarly to abrasives.

Effect of the heat shock

The prompt sublimation (the change from solid to gaseous form) of CO2 pellets in contact with the surface absorbs most of the heat from a very thin upper layer of coating or pollution. Most of the heat is absorbed due to the latent heat of sublimation. This rapid transfer of the heat from the upper layer of coating to a pellet creates an extremely high temperature differential between consecutive micro-layers inside coating. A sharp temperature drop creates a high local shear stress between individual micro-layers. A resulting shear stress depends on the thermal conductivity of coating and on the coefficient of the thermal expansion as well as on the continuous increase of the temperature in the lower layer of the substrate. The high shear stress occurs in a very short time and causes micro-cracks between the individual layers. This leads to the interruption of the coating adhesion to the surface of the substrate.

This combined impact of the dispersion energy and extremely rapid transfer of the heat between the pellets and the surface causes an immediate sublimation of the solid CO2 into gas. The gas expands to nearly 800 times the pellet volume within a few milliseconds after contact with the surface. This is called the mini-explosion. The „mini-explosion“, during which the pellets become the gas, spreads further, and this way the particles of the coating fragmented by the heat from all substrates are removed. This occurs due to the lack of reverse energy of the pellets, which is expanding over the entire surface during the impact. Gaseous CO2 expands along the surface and its resulting „explosive front shock wave“ creates an area of high pressure centered between the surface and the high temperature fragmented particles of the coating. The result is a very effective uplift, which carries the particles away from the surface. 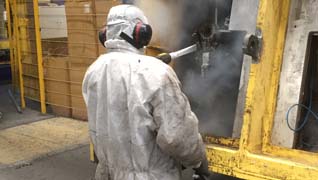 What we can clean up